skip to main | skip to sidebar

So far I got 2 gifts. A pair of some classic comics that I had when I was a kid. And finally a job.

Since I was "let go" by the company I worked for more than 5 years. I've been to a not-so-fulfilling job for 2 weeks. A part-time job that somehow sustained my literature (comics) and tons of job application.

I got to be more "domesticated".

And now, I'm happy and so-say merry that I got a new job with a good pay.

...and the curse part. Well, I really realized that I had an unappealing boss in a form of my previous company's VP (back then AVP). Anyway, it is somehow irritating that she would make a "retrenchment-reunion party" at the end of this year. Too be honest, IT IS really not appealing. So that's why, I have to bear in mind that the 5 years I've went through them, I'm forced to just walk away and never remember it.

So here's the Top 3 reason why I will cut my connections from that cursed 5-years @ TDS:
(by the way, wasn't aware that there would be a segway to this...)
1.) JBW & JK (or better known as "The Management") ways of improperly investing to something that people like us can actually do. (investing to other stuff that would make them look good and not their people)
2.) Colleagues who I thought are Friends but are really front & back stabbers. Let's give some names... Wynner, JM, Marc, some from Training Dept, ES Dept.
3.) Leaders who you thought will be there to completely defend you, but in the end they didn't have the balls to protect the people they said to protect and guide.

Anyway, I guess I have to just really vent out my feelings after more than 3 months of just not saying anything. I just really feel bad about what happened. I blame the people there. And also I should have said something or acted something. Like a protest or really voice out. I guess I can't do anything but just move forward and never look back.

I know it's the time to be grateful and merry. I am grateful that this thing happened, made me be more tough on facing it. And never give up.

Oh well, since I already vented out (finally). It's time to really move forward and never look back. :)
Posted by Psych Boy at 10:16 PM No comments:
Labels: good timing, hopes, mixed emotions, realization

So how do i start?

let's go straight first. i will be part of the unemployed market by September 9, 2011.

yes, i just lost my job this morning.

well management tells us that our department, the one that i'm working at for more than 5 years is being retrenched and it's part of the "changes in the wind" situation right now.

it was announced yesterday during our general assembly by our president.

anyway, so there you go. i'll be jobless in a month.

basically i just need to finish my remaining works and turnover it by the end of the month.

and somehow, even we all know that the war is ending, we'll still going to fight for it. no matter what. we leave HRO with our faces looking up and proud.

it just saddens me that more 5 years here. i've grown and learned a lot.

so today. it's not a good day for all of us here at work.

i just can't sleep right now. i guess sleeping from 2pm to 7pm wasn't that fulfilling for a sunday. but somehow, i got to catch-up right? hahaha

anyway, tomorrow i'm planning to catch the public transpo instead of driving to work. since the meeting was moved to tuesday. plus i have to fix things at the office on monday. like we have 2 on-sites for monday, fix up the banners for QCPU, jobs@night textblast, meeting at 6pm with a magazine group. and yeah, there's paying migs 500 for the itouch fixing and paying athan for the bulbs.

haaay... thinking about it, puno na pala monday ko. haaay.... better than that than doing nothing, right?

ayon, di pa rin ako inaantok ah... oh well... i guess i just have to read something, or do something right?

Christ, what an asshole.

Whatever happened to having fun and supporting one another... you know, friendship?

I guess it says about being into groups or packs... like wolves or something. There will come a time that your so-called "friends" will stab you at the back and just leave you dead.

So far, it's the thing that is running in my head with some or most people here at work.

And somehow it's the reason why I'm planning to leave soon. To avoid any connections with them. They're such assholes. Seriously, even some people whom I trust a lot.

Anyway, I can still stay calm and keep it all to myself, or just releasing it through this blog.

And if ever I join them they'll mock me on why I "walked-out" before... sighs! how shallow can they get? Assholes!

Oh well, somehow, I still really feeling bad about it. But somehow, still can be subtle about it.... for now.

Now I really feel angry to all of them! Fuck them all!! I hope they all die!! (I know I sound like brat, but I'm starting to get angry while typing this blog... grrrr... I just really that angry towards them... all focused, enjoying and laughing there in the other room. sighs!)

Sometimes I just want to report them so that they deserve it, but I can't.

They're still my friends. Friends to tend to be assholes.

Anyway, I'm still angry at them and the one whom I considered close mocks me more... gaaaah!! 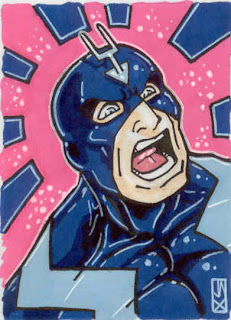 okay, I'm back on blogging.

well, i'm not quite sure yet if i'll be regular on blogging stuff again... but hey, there's no harm in taking this avenue again...

i guess i just have to put this on this entry since i need to put something... right?


so let's start with Black Bolt...

yes, "Black Bolt".... that's the name that i'll be using to a specific person that I want to ran over with my car back and forth. and later swing a bat at "Black Bolt"'s face until it's like smashed watermelon.

anyway, see how i want to release all the stress at "BB"... hahaha yeah, "Black Bolt" is quite long, than "BB"... hhahaha

if ever someone i know reads this blog (which i doubt), will surely laugh to see this pic... hahaha

hmm... does someone i know (aside from my best friend) got the chance to read my blogs? hmmm.... i'm quite curious about it... but somehow i don't care too... hahaha

anyway, sometimes i would like some of my other friends see this blog too... well just this entry... hahaha


now, i'm quite getting bored to type more stuff... 'cause i think i got nothing to type anymore... hahaha

hmm... the students haven't started to text me.

this is bad. really, REALLY BAD.

Bad in a sense that we can't do time-travel and make it all work right. I know there's a solution on this one, get the list of the 10 and call them to remind them. But I have other priorities to do, but I guess I should try to juggle things out and fix it.

Fix it. That's 2 words that somehow I'm not good at all. But let's see if I can fix this... w/o the help or assistance of others. It's my mess after all, right?

But still, after all this is done, I'm still going to kill Pong Aguila on this one. hahaha. No worries Pong, we're still good friends, but I'm really going to kill you for this one. :P

I feel like each day that comes, i want to just break the window in front of my table at work and just jump do a free fall.

... but then again, I hate a goowy-messy death.

Anyway, it's Sunday and somehow I still want another day to just lay down on my bed, try to catch-up on what I 've missed in the tube. Just be a regular home-buddy.

I wish that things at work would fall on the right places. And basing on what I'm seeing it's being chaotic in a sense of order. And it making my 'resignation-bucket' more heavier.

... and there's It's Academic. I have a lot against it and that somehow, I'm still doing the task. Sometimes I hate my attitudes that I tend to say 'yes' even if I explained why I said 'no' on the first place.

Thus I'm going to kill Pong Aguila on this one. Well one thing, our friendship is just based on work-laughs and that I tend to avoid hanging out with him. He's quite close-minded. Even his opinions and perspective of stuff, I don't like it. But hey, everyone has the right to express their thoughts.

... it's that my thoughts/opinions don't mesh-up with his, 'cause his way of thinking is too old and mine is a little bit complicated and updated. Plainly, I just hate-HATE him. Good thing he's a few meters away from my desk this time. I guess that's good for me.

... But that It's Academic, it will really cause him his life. I'll really kill him for passing it on to me halfway of his project. DAMMIT.

Oh, well. I guess this week I'll be exercising more brain cells on work. I'll try to make a 'Dark Phoenix' manifestation at work, if I can. Last week with the smiling at the meeting w/ JBW made me feel good.

Hmm... I guess i should try smiling again.

Anyway, got to prep-up for tomorrow. 4 Field works this week. Will be trying to get people to my office for our clients needs.

Oh it's going to be one of those weeks again, and this time I think I'll be having just a one-person support all the way. Thanks to AM & JBW for ruining everything.

Anyway, I'm currently emailing my resume to some notable companies just trying to check if I'm sellable to the HR market.

Wish me luck this week.